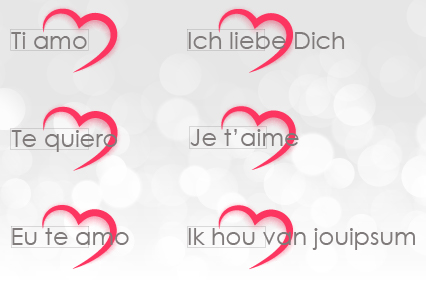 When a professional translation is ordered for a website or other medium that has been designed for a specific language, it is typical for problems to arise when fitting the new text into the allotted space. In each language a different number of words may be needed to express the same idea. That is why ideas that we want to convey in French or Arabic usually take up more space than in English or Chinese.

Expansion and contraction of texts

This effect is known to translation professionals, and is called expansion or contraction depending on whether more or less space is taken up. For example, when translating a text from English into French, we know that the translation will expand by about 15% compared to its original version.

Although it is very hard for the translation and the original to end up with exactly the same number of words, the effect can be more noticeable depending on the language of the target readers. Generally speaking, Romance languages use more words and Germanic languages use fewer to convey the same concept.

How do contraction and expansion affect design?

Currently, we live in a highly visual world, in which the text on websites, social media, catalogs and brochures are designed to create a sensation and capture people’s attention within seconds. As result, when we have a very noticeable expansion or contraction phenomenon, the end-product may lose its efficacy and adjustments may be needed to conserve the original emotional impact.

At SeproTec we work with localization experts who help our clients to achieve a balance between translation and design. Their work ensures that the original communication goal is preserved, but they may use more appropriate cultural formulas, considering not only the concepts, but also the feelings they engender or the use of a vocabulary that is more familiar to the target readers.

Thanks to their work we are able to guarantee that the product that the end-client receives is true to the original, not just in terms of content, but also intent and appearance. A very graphic example of this are translations into Arabic: images and text boxes are ordered inversely so that they make sense in relation to the direction in which the text is read.

Other factors to bear in mind

In addition to the unpredictability of the amount of characters in a translation, additional factors, such as compound nouns or character width complicate the management and layout of the text.

Languages like Finnish, Dutch and German represent what in other languages would be a sequence of smaller words as a single long word.

For example, the Spanish phrase “Seguro de Responsabilidad civil de automóviles” becomes “Kraftfahrzeug-Haftpflichtversicherung” in German. Although in Spanish that phrase can be adjusted to fit two lines, in German it cannot be automatically adjusted, which can present a layout challenge.

How does the work done by localizers affect prices?

Most of the language combinations are priced based on word count in the source text (the original text).  Nevertheless, there are times when pricing is based on the word count in the target language.  Since the variation in word count for a given translation cannot be known beforehand, generally conversion ratios are used depending on the project languages. These are established based on the average increase or decrease of the terms.

The final cost of a project will also depend on other factors, such as the subject and the modifications made by the localizer or layout team.  These are usually estimated in work hours. Nevertheless, it will always be faster and more economic to use our specialists than to hire a separate graphic designer for each language to which a document needs to be translated. Our in-house layout teams ensure that your designs are appropriately adapted, taking expansion and contraction into account.

In conclusion, we can say without a doubt that a good professional translation service will always give clients the results they’re looking for. It isn’t just about quality texts, but also good adaptations of the end-product.